Skip to content
My Rant on Betrayal | Grief, Mourning and Beyond

My Rant on Betrayal | Grief, Mourning and Beyond 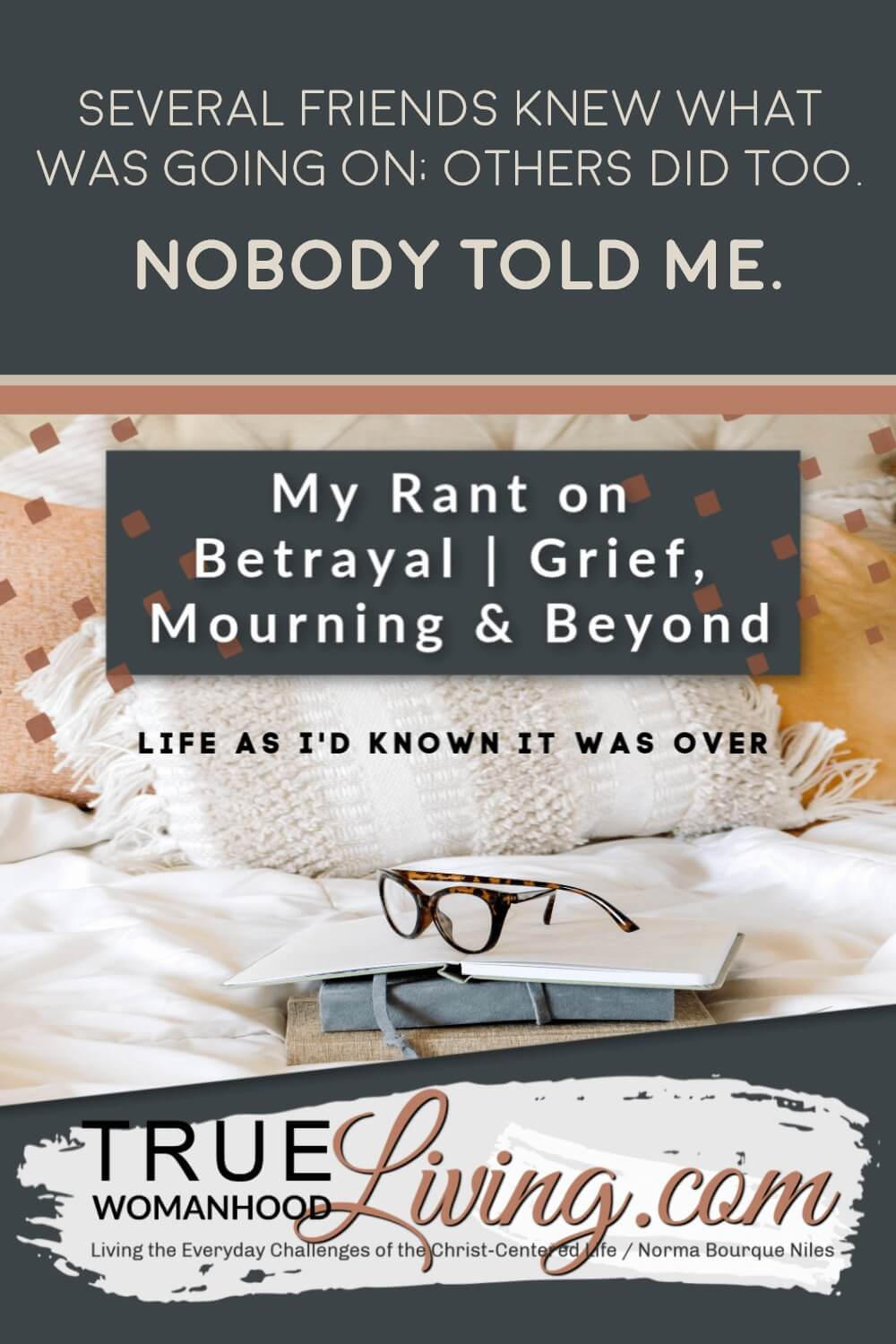 It felt like the end of my world, at least life as I’d known it. My spouse, to whom I’d committed so much to for 46 years, had been having  an “affair” for a very long time. The one person who knew me best in life had betrayed me. How was I supposed to get through this?

The most painful part was feeling betrayed and lied to by the person who vowed to love, honor & protect me, till death do us part. Trust was destroyed in that moment in time. It was traumatic to discover that a part of our life was a sham lived in secrecy and deceit. How could he do this to our marriage? How many times had he lied, looking me straight in the eyes?

The last person I’d have suspected of having an affair was him. He was NOT that kind of man.

My Rant on Betrayal | Grief, Mourning & Beyond

How I cried. Buckets of tears fell as I grieved. There were so many questions that I would never get answers to.

Asking the Hard Questions Ripped All Self-Confidence I Had Left.

My mind flashed back in time to a day he shared that he’d stopped for food at a local take-out. Since it’s just a couple miles from home, I asked why he hadn’t come home to eat. His reply was, “oh, I saw this woman from the post office there so we sat and ate together.”

I found that really odd so I just asked him, “Do you think it’s appropriate to eat with other women without me there?” He looked at me with a funny, puzzled look on his face and said no, he didn’t think so. I filed that thing away.

Now, I flashed forward a few years and discovered this is the woman he was seeing. How convenient.

He made the choice to turn away from the marriage. He made the decision to open the door to an affair and put himself in a situation that he knew he should not. No one can control what their partner does, no matter how hard they try. He was in total control and now, there were consequences.

1 Corinthians 7:15-17  “But if the unbeliever departs, let him depart; a brother or sister is not under bondage in such cases. But God has called us to peace. For how do you know, O wife, whether you will save your husband? Or how do you know, O man, whether you will save your wife? But as God has distributed to each one, as the Lord has called each one, so let him walk…”

I’d always honored my husband by keeping our issues between him and me. I was not going to talk to outsiders about what our marriage was or was not. It was nobody else’s business. I simply talked to God about it.

God Was My Support System

Proverbs 3:3-5 “Trust in the Lord with all your heart, and lean not on your own understanding. In all your ways, acknowledge Him, and He shall direct your paths.” God knows what lies ahead.

As I Sat In My New Home (one month later), I Cried Out to God, Again in Tears

You See, as My Marriage Fell Apart, I Lost More Than a Husband

I will never counsel a couple to separate or divorce if there is one spark of hope left. It may seem like the perfect solution at the time but really, you’re just opening up a new can of trouble. The effort it takes to rip it all apart and start anew could well be spent in repairing the mess. Unfortunately though, to make it work, you need both partners’ commitment.

God doesn’t mind if you blame Him, scream at Him, or simply say “Why?” Jesus expressed these emotions himself when on the cross (Mark 15:34). He understands what we’re going through.

Deciding to Move Forward is Up to You. Within 4 Months, I Moved On 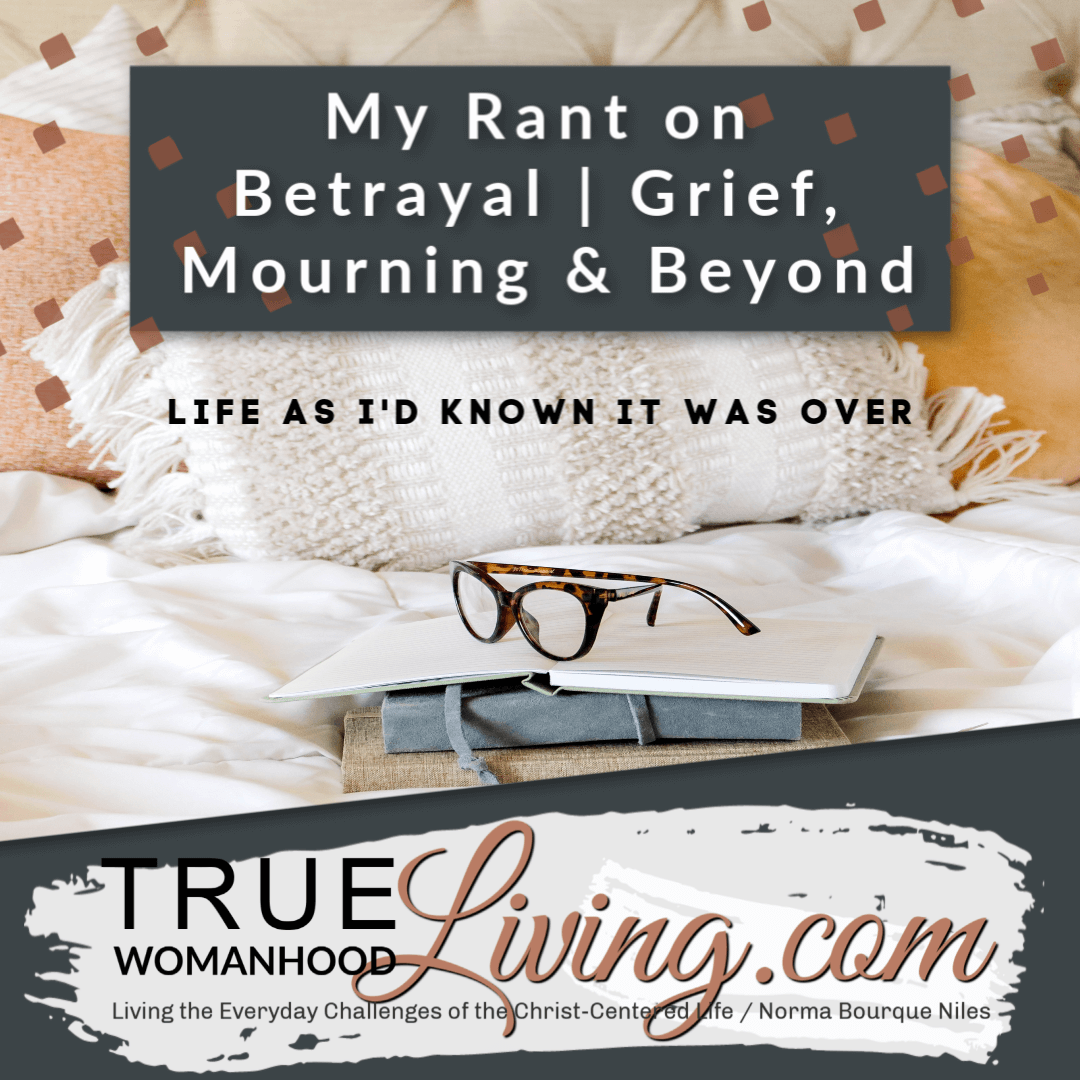 Several Friends Knew What Was Going On; Others Did Too

“Oh, what a tangled web we weave, when first we practice to deceive!” (Sir Walter Scott, 1808)

It’s not something that is easily forgiven or forgotten. I have to live with the fact that people think & believe things about me that are not true. But I’m called to forgive all of it: my ex-spouse… friends… sisters… etc.

The anger, bitterness and sadness will not end unless I extend forgiveness to all parties. As God freely forgives me, I need to forgive others. The pain has to go and move on by building a new life.

CONTINUE MY STORY HERE: The Day My Heart Stopped Beating