Skip to content
Be Responsible for Every Spoken Word

Be Responsible for Every Spoken Word

Ever stopped to think how much power your words have on it’s listeners? Well, they do: the words you speak preserve or destroy life. You are responsible for every spoken word. Sobering? It’s NOT what you say that’s the problem, it’s the WAY you deliver the message.

Let’s take a look at what the Bible has to say on the subject. Because…Proverbs 18:21 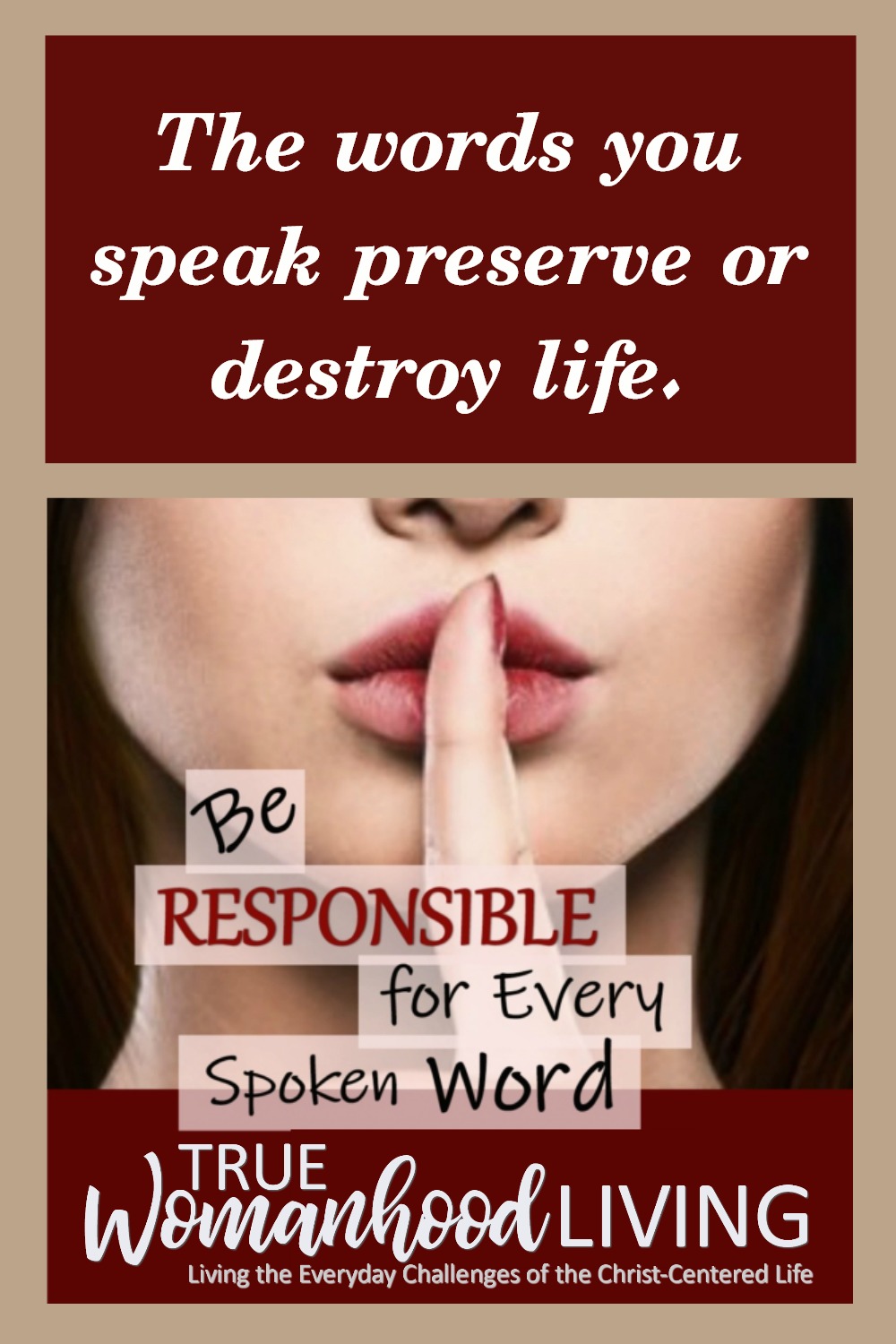 Your Words Have the Power of Life & Death

“Trash language cuts & maims, but there is healing in the words of the wise.” Proverbs 12:18

You’re to Be Responsible for Every Spoken Word

Thing is that WORDS create. Whether words are good or bad words makes no difference. They are seeds you sow every time you speak, that grow no matter what. They are no respecter of persons. They build or they tear down. YOU, on the other hand… have control on the type of seed you sow. THAT is your responsibility before God. That is why the Bible commands us to put a guard over our hearts.

Matthew 12:33-37 (MSG) “If you grow a healthy tree, you’ll pick healthy fruit. If you grow a diseased tree, you’ll pick worm-eaten fruit. The fruit tells you about the tree. You have minds like a snake pit! How do you suppose what you say is worth anything when you are so foul-minded? It’s your heart, not the dictionary, that gives meaning to your words. A good person produces good deeds and words season after season. An evil person is a blight on the orchard. Let me tell you something: Every one of these careless words is going to come back to haunt you. There will be a time of Reckoning. Words are powerful; take them seriously. Words can be your salvation. Words can also be your damnation.”

Our words – our speech – what we say – is a perfect reflection of our hearts.

According to Jesus, we will give an account for every word we have spoken. THAT, is a sobering thought.

There are more than 150 verses in Proverbs devoted to the tongue, speech & words.

That’s one out of every six verses.

How we use and employ words make ALL the difference in the world.

Words Tell Us About a Person’s Character & Heart

“The Words You Speak Will All Depend on What’s Filling Your Heart.”

If We’re Not Careful, Words Can Be Destructive

It’s Not That The Fool Deliberately Pursues His Own Destruction.

He’s So Reckless With Words He Invites His Own Rebuke With His Careless Speech.

You will make more progress in persuading an opponent and have far greater success making your viewpoint known and accepted when you speak softly and gently. Harsh words rarely succeed in overcoming stubborn opposition.

Proverbs Commends Being Slow to Speak / Choosing the Appropriate Time

WHEN We Speak Is Often As Important As WHAT We Say

Even the most priceless truths fall lifeless to the ground if spoken in haste and with harsh tone. Listen. Think. Weigh the circumstances. Ponder the consequences. A fool can hide his lack of knowledge by simply keeping his mouth shut.

Abraham Lincoln put it best when he said:

“Let no corrupt talk come out of your mouths, but only such as is good for building up, as fits the occasion, that it may give grace to those who hear”

Follow me as we take a look and glean a few takeaways! These are more pieces of advice that address our hearts, tongues, and priorities – some specifically aimed at wives and mothers.

YOUR WORDS, DO THEY STRESS OR REFRESH?

GOD SHARES ENCOURAGEMENT FOR WIVES OUT THERE

A WIFE CAN MAKE OR BREAK HER HOUSEHOLD

Scripture’s Language Is Strong – Due to discontent, a nagging wife is a sorrowful thing in her household. Wow! Once she loses sight of Christ, the dangers of becoming quarrelsome and generating unnecessary friction increase dramatically.  The godly wife is to seek loving God and her husband wholeheartedly, for this leads to peace and prosperity.

You may be thinking: these are about sons, not women! Yet the son reflects the mother, the one who teaches him.

These proverbs reinforce the powerful reality that our mothering has a long-term impact on the attitude of our children…and that we should be so deeply tied to the nurturing of our children that their disobedience or disrespect is heartbreaking.

The last proverb gives us a solution. It tells us moms that we have to be willing to love our children through discipline, correcting their wrongs with devoted discipleship, for it reaps godliness rather than shame.

While touching aspects of womanhood a little differently than Proverbs 31, these proverbs provide wisdom that remind us to speak sweet words, serve our husbands joyfully, and impact our children for good.